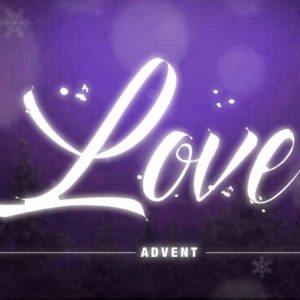 Welcome to this Fourth Sunday of Advent. Today Pastor Steve speaks about LOVE. Taken from:

23 When Zechariah’s week of service in the Temple was over, he returned home. 24 Soon afterward his wife, Elizabeth, became pregnant and went into seclusion for five months. 25 “How kind the Lord is!” she exclaimed. “He has taken away my disgrace of having no children.”

26 In the sixth month of Elizabeth’s pregnancy, God sent the angel Gabriel to Nazareth, a village in Galilee, 27 to a virgin named Mary. She was engaged to be married to a man named Joseph, a descendant of King David. 28 Gabriel appeared to her and said, “Greetings,[a] favored woman! The Lord is with you![b]”

29 Confused and disturbed, Mary tried to think what the angel could mean. 30 “Don’t be afraid, Mary,” the angel told her, “for you have found favor with God! 31 You will conceive and give birth to a son, and you will name him Jesus. 32 He will be very great and will be called the Son of the Most High. The Lord God will give him the throne of his ancestor David. 33 And he will reign over Israel[c] forever; his Kingdom will never end!”

35 The angel replied, “The Holy Spirit will come upon you, and the power of the Most High will overshadow you. So the baby to be born will be holy, and he will be called the Son of God. 36 What’s more, your relative Elizabeth has become pregnant in her old age! People used to say she was barren, but she has conceived a son and is now in her sixth month. 37 For the word of God will never fail.[d]”