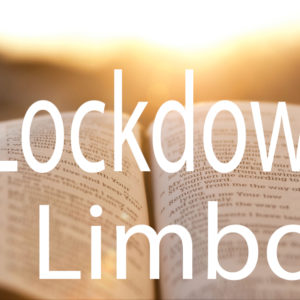 Everything has changed. In a matter of days our world changed. • Lockdown! (photo – baby) Shelter in place without going crazy. Now what? Limbo!

The church has stepped away from the theory of Limbo as recently as April 2007.

These chosen saints who resurrected after Jesus arose on Easter Sunday began to walk around the Holy City. What a trip it would have been to see people who were dead for ten or hundreds of years cruising around Jerusalem!

Notice they rose from the dead the moment Jesus died and waited until Sunday, after Passover, to enter the city.

I feel like I am in limbo today. Lockdown limbo.

Are you in a state of limbo? Uncertainty?

Now what? What do we do while we are waiting – in limbo?

That was a question for the disciples.

It was after Easter and before Pentecost.

They had followed Jesus three years.

They expected great things: A Kingdom of God, the removal

Roman oppressors, and to Rule this new Kingdom.

Then Jesus died and with Him their hopes and dreams.

But He came back. Now what?

We’ll come, too,” they all said. So they went out in the boat, but they caught nothing all night.

But you won’t catch anything without Jesus’ help.

Gone fishing. Back to the familiar, returning to his old occu-

Why? Did he not have anything better to do?

Was he in Limbo?

Had he given up his preaching commission.

Whatever his reason for fishing, he didn’t catch any.

Some say that God would not bless him with a catch.

But wait, He does.

When you are in Limbo…

Peter had been called to be a fisher of men. So are we.

1 Jesus said to Simon, “Now go out where it is deeper, and let down your rwts to catch some fish.”

Peter was called to fish for people.

When you are in Limbo..

Peter was awestruck by the number of fish they had caught Just as before, when they follow Jesus, they have great success. So will you.

Ask God to guide you out of Limbo and into doing something for Him. He’ll make it great.

Joe – care provider, Paradise fire prayed, witnessed to her. Ruth – neighbor planting her garden. “I was looking for some­thing to do and this is it”

Many stories of running errands. If nothing else – Pray!

‘ Imitate God, therefore, in everything you do, because you are his dear children.